I started writing the attached post in June. As a former foster and current adopter, I had been asked to write a piece for The Howler, the newsletter of the Alaskan Malamute HELP League. We knew at the time that Sasha's health was deteriorating and I feared publishing it, as it seemed disingenuous to write about Sasha as if all was fine.

Things continued to be 'fine' with Sasha until yesterday. As she got a bit older she was a bit slower, a bit more unsteady on her feet, but she was not in pain, and in no visible distress. The past few weeks I'd taken to carrying her down the stairs in the morning, the combination of her weak backend as well as her poor eyesight was too much for her to handle first thing in the morning and we need to navigate stairs to get to either door for a walk.

Nothing marked yesterday different from any other day. Sasha had a wonderful walk last night, then we left her and her 'brother' Chet while we did some running around. We were back two hours later and found her unable to support herself. She no longer had the use of either her front or back legs. She was able to move them but they were not strong enough to support her. We were concerned that perhaps she had fallen and tired herself out trying to get back up, so we placed her back on her bed and gave her food and water and lots of pampering. She continued to struggle through the night, and her breathing was laboured so early this morning we said our good-byes and my sweet, sweet dog passed away at the  Ottawa Animal Hospital.

Good bye sweet Sasha-bear. We only hope we brought you half as much joy in these last three and a half years as you brought us. Her arrival on our kitchen floor was the well orchestrated plan of our friends Duffy and Adrian, who felt that our lonely dog Chet: (whom we found on the side of our cottage road in 2003) needed a buddy.

She was perfect for us. An older (read 'calmer') dog, good with other dogs, great with cats (although our Siamese might have debated that being licked by a Malamute does not constitute 'great') and she had no issues with children. This last point was to become very important to us as we found out we were pregnant 2 days after her arrival.

She came to us as a foster dog. We were dipping our toes into the pool of two dog ownership and helping out a great cause at the same time. I had sworn to my husband that caring for two dogs was no more trouble than one and now was the chance to prove it. She was coming from another foster home, and had been moved several times before that. We didn't know much about her, other than that she was around 8 and had lived with her brother. We do not know if her brother was abandoned as well, nor why she was turned over to the Kingston Humane Society.

We knew upon meeting her that she had some health issues. Several vet trips determined that she had nuclear sclerosis, and it was believed to be congenital. Her eyes were cloudy but her vision was minimally impaired and it was not progressing. She also had a weakened hind end. She appeared to have stiffness in her knees and was on a glucosamine supplement.

Neither of these issues stopped her from being a huge-hearted cuddle-muffin. Even with her bad legs she managed to find her way on to our bed every chance she could get. She was a great snuggler and only asked for belly rubs in return. After the first month of our fostering her we received a call asking us if we would like to adopt Sasha permanently. My husband took the call, and I swear Sasha knew what it was about. The entire time he was on the phone she turned on the charm, rubbing up against him and flipping over begging for belly rubs. And it paid off. Sasha soon became a permanent member of our family and a welcome addition.

She  was a sweet, gentle animal, moving through life as a graceful senior. But every now and then, usually when the weather turned a bit cooler she'd get the wind in her sails, and then look out, she was off! She loved to romp in our back yard, doing a circuit from one side to the other, sometimes chasing one of us, sometimes chasing her Chet, and sometimes chasing that imaginary bunny she just knew she was going to catch one day.

One of the most often asked questions we've received is how we felt about having a baby (and then a toddler) with our two huge (to most) dogs. They are both sweethearts with her. Sasha is my daughter's favorite pet, her 'Sasha-bear'. My daughter spent much of her early life having the top of her head sniffed by Sasha and repaid it with hugs and cuddles when she could. V often helped us walk both pups: 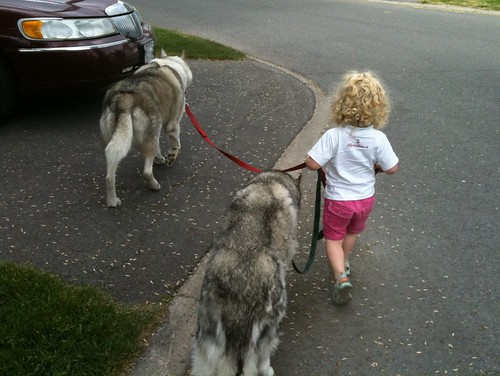 and they in return faithfully cleaned the kitchen floor after the baby attempted to feed herself.

An older dog, Sasha loved to head out to the back yard and hang out in the foliage. We often went on Sasha safaris, trying to find her latest hiding spot. Sadly, she had a terrible fear of thunderstorms, which caused her to pace around in circles until they have well past. Being up all night comforting her (and letting her out - why do you want to go where the booming is Sasha?) prepared me for all-night parenting like nothing else could have!

Within the past year we discovered that she was suffering from degenerative neuropathy as well. She was no longer able to walk the distances she once did, or keep up the same pace. We were very careful of her back nails as she was dragging her feet with each step. There was no treatment for her condition, but we were certain she was not in pain so we were determined that she would enjoy life for as long as she could and I think we succeeded: